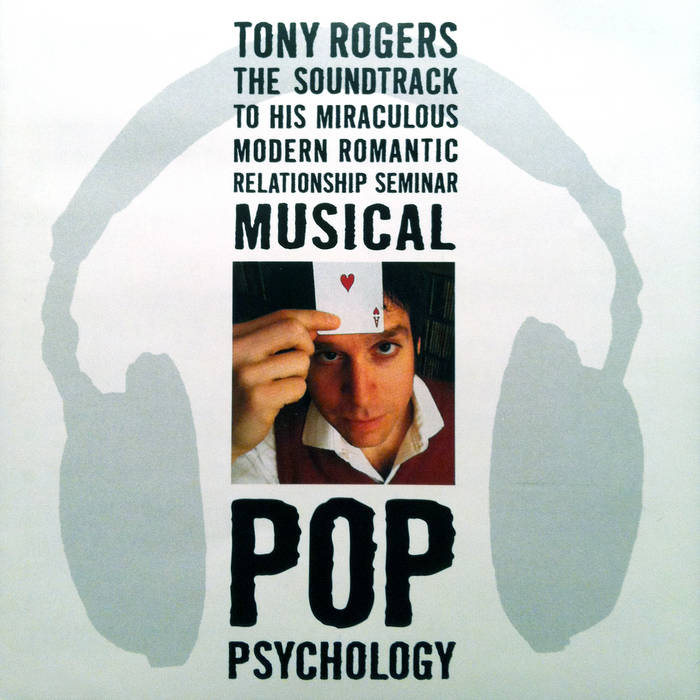 This is the soundtrack to the critically acclaimed "relationship seminar musical" Pop Psychology, which ran in Chicago for 5 years between 2002 and 2007, in several venues including the Mercury Theater, Schubas, and its longest home, Davenport's. The show was directed by Michael Starcevich, produced at times by Darren Cole, and co-starred stellar pianists Steve Kouba and Taylor Nash. It also received endless support, lighting, sound, etc. from Mike Mooney.

Critical praise for the album:

Critical praise for the show:

"The original pop tunes and the humor come fast and furious... 'Pop Psychology' is filled with both cheeky observations about the self-help genre and catchy melodies you'll hum all the way home." —Chicago Sun-Times, RECOMMENDED

"Picture Paul Simon channeling Dr. Phil and you get the gist of Tony Rogers's self-help sing-along... The original score is reminiscent of the melodious, twisted tunes of They Might Be Giants, only sweeter. The jokes are giggleworthy, and Rogers's warm, easy pop style makes it hard not to smile and sing along." —Chicago Reader (CRITIC'S CHOICE)

"I enjoyed the show especially because not only was it funny, it was touching too. Tony Rogers' music and lyrics reflect the buoyancy of intimacy as well as the heartache. This strikes me as honest and admirable." —Ben Hollis, Ben Around Town

"I've been listening to Tony and his band The Good grow increasingly better at their craft of being pop musicians, but nothing really indicated to me that Tony would be out with a disc this good, and a performance that's... it's extraordinary. I laughed, I cried, I sang along. The show is sharp, well paced and brings the audience in without pandering. Unlike most concerts I've seen lately, I'd attend this again!" —Richard Milne, WXRT

2002 CABARET SHOW OF THE YEAR. "The songs are hilarious... You can't help but laugh out loud and feel good. This is a show you shouldn't miss!" —Chicago Arts & Entertainment